I called him Sweet Boots almost all the time, because that’s exactly who he was. Just the sweetest cat, not a mean bone in his body. A very gentle soul.

Back in August of 2006, Boots was diagnosed with CRF (chronic renal failure). From that time to this,  Boots fought the valiant fight until, as expected, the kidney disease finally won out. But he (and we) did win 3 extra years full of life and the pleasure of each others company.

Even though we knew this would happen eventually, it didn’t make it any easier for any of us. There is very definitely an emptiness in our home.  That feeling of a specific missing part of the whole. It has taken me a while to get used to not having to medicate  him every night. I kept thinking it was time to do his meds. I still have to remind myself sometimes.

There were many times that Boots seemed to be studying us, as much as we would study him. He seemed to enjoy watching us, but I don’t know for sure of course. I don’t want to anthropomorphize too much, but there were times I thought he was looking at us and thinking how strange human behavior is. I remember him watching me put on pantyhose, and I swear his expression said, “What the hell is she doing?” :-) 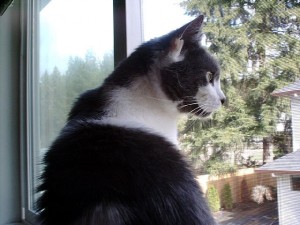 He was fascinated by shadow and light. So when I went to my first (and last) cat show and saw the laser pointers for sale, I got one for him. He loved that red dot, man did he ever. He especially loved spinning around in circles until he was dizzy. And as soon as he recovered he wanted to spin around again. When the laser wasn’t being used, Boots would sit and stare at the usual spots where Bill would shine it, and look back and forth at Bill and these areas, with an expression of, “well, where’s the red dot, you gonna play with me or what?” Bill would happily oblige.

And he was a belly-boy. Boots absolutely loved to have his belly rubbed, and it was never a trap. He would purr up a storm.

Boots always loved to play with the water in the water bowl. As a kitten he would place his toys in the water bowl and bat them around. He did outgrow that, but he never stopped  moving the water dish around, and always moved it into the path of human foot traffic. Despite our best efforts we eventually would kick the bowl and spill water everywhere.

Since he’s gone, the water bowl stays where it’s been placed. :-(