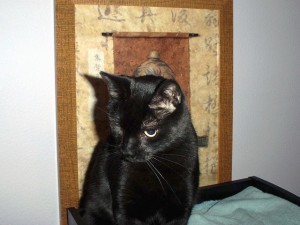 It’s funny, we didn’t call him Orion very often, yet he always knew his name. When we got him, we already had Merlin, and for several years it was just the two of them and us — “the dog” and “the puss cat”. He answered to both, Orion & puss cat. Even last night, when the vet said, “Orion”, he turned up and looked at her. Just amazing to me.

I’m so glad I worked from home yesterday, because it was so normal, he was in my lap, head resting on my arm while I worked.

He’d been fading, and had started to become sort of incontinent… just not making it all the way to the litter box. But last night he lost control and went in the bed. I picked him up and put him on the floor, and he did something he’s never done in 16 years… he stayed there, laid down on his side, and laid his head down too. His breathing was very rapid as well, so we knew. And we took him to the vet hospital (24-hours). They were his regular vets there as well, so it was a comfort in that way…

He was gentle always, and loved humans, no matter who visited us, he wanted pets from them… Only exception was when he felt threatened like at the vet’s. Then he would get his Brooklyn feral up. A few months ago, even though he was already sick, it took 4 humans to hold all 6.5 lbs of him so the vet could get blood. Last night, when the vet brought him back after inserting the catheter, she said how good he was.. us: he didn’t fight you? doc: nope, he was easy. <sigh>

He purred for us last night, his really big purr, with coos included, he said goodbye and I feel fortunate in that because I know from my own experiences,  it is not always the way.

I was always his human, he was always my familiar. I experienced with him communication on a level I didn’t know existed until I met him.

And now silence, and a huge empty space within myself…